Sandy welcomed by morons desperate to get on the news

Weather News: Superstorm Sandy has been eagerly welcomed by morons across the eastern United States and Canada for giving them a chance to appear in local news reports. 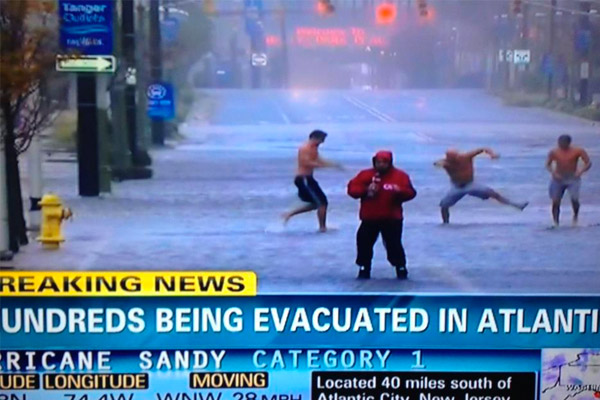 Sandy has swept into the US East Coast with hurricane-force winds – bringing flooding, cutting power and giving hundreds of imbeciles the opportunity to appear doing something dumb in the background of weather reports.

“Dozens of people may be dead and I might be risking my life and the lives of emergency service workers – but that’s a small price to pay for dancing around in a pair of shorts in the background of a local news report,” said one delighted moron. “I might even hold up a hilarious placard that reads ‘Sandy can blow me’.”

“The timing of the storm is perfect!” said another dimwit. “Thanks to Sandy happening so close to Halloween, I already have a costume picked out – so now I’m going to dress up as Fresco Jesus and stand around in a flooded street in the hope I briefly feature on the news!”