Legal News: Fast-food behemoth McDonalds, one of the principle sponsors of the London 2012 games, is suing Mo Farah for his celebratory ‘M’ pose – which they say is a copyright infringement of their own logo. 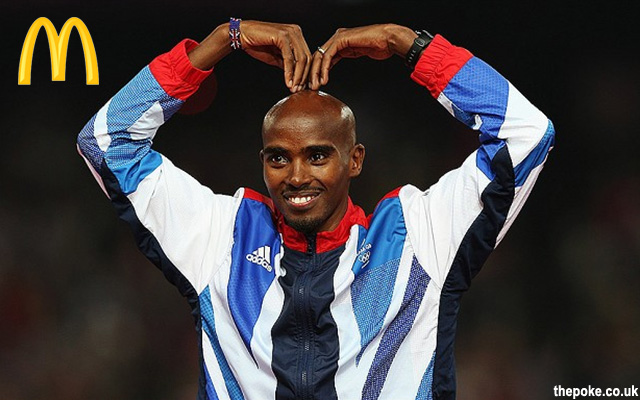 “This is just a direct copy of the golden arches, the well-known trademark of McDonalds,” says lawyer Mervin Van Baker.

“Surveys show it is recognised as such by 96% of the world’s population. Tribes in the Amazon who eat shit for breakfast and let their dangly bits do the talking know that ‘M’ means happy kids and unlimited BBQ sauce.”

While Mo’s managers insist the pose ‘is just a bit of fun’ and has ‘nothing to do with nuggets’, McDonalds assert that he was insinuating to the world that he was ‘lovin’ it’, and should therefore pay the company for the expression of joy – their patented emotion.

“We’ve got joy, Nike have got determination and Coca-Cola own surprise/excitement,” Van Baker continues.

“Every day, people all over the world pirate those emotions without paying. Finally we have someone with their fingers in the till.”

Reports that Strongbow are to sue Usain Bolt remain unconfirmed.