McDonald’s staff to be armed to help boost Olympic security

Gun News: Staff at the Olympic Park McDonald’s will be issued with machine guns, in order to help ease the 3,500 security guard shortfall at the games. 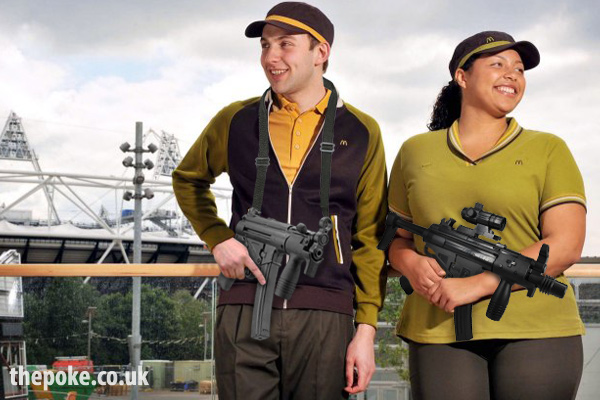 Security contractor G4S say they may not have enough trained staff after encountering “some delays” in processing applicants through the final stages of training.

It’s hoped that by issuing McDonald’s staff with semi-automatic weapons they will provide a ‘strong visible deterrent’ against terrorism, as well as discouraging customers from complaining about the overpriced food.

“Our staff have already had intensive catering training,” said a spokesman for McDonald’s. “So it’s not much of leap to put a Heckler & Koch MP5 sub machine gun in their hands, instead of a spatula. After all, they both have a retractable buttstock and single-fire trigger group.”

If the armed McDonald’s staff are not enough to bolster security numbers at the games, Home Secretary Theresa May has hinted that binmen may be asked to string grenades off their vests to serve as a further deterrent.

Disappointed O2 users find no one has called during service blackout