Euro News: Poland’s Citta the psychic elephant, Ukraine’s Soothsayer Hog and Fred the Ferret, as well as Sussex-based Nicholas the Llama – have combined forces to predict that John Terry will make an utter tit of himself during the upcoming European Championships. 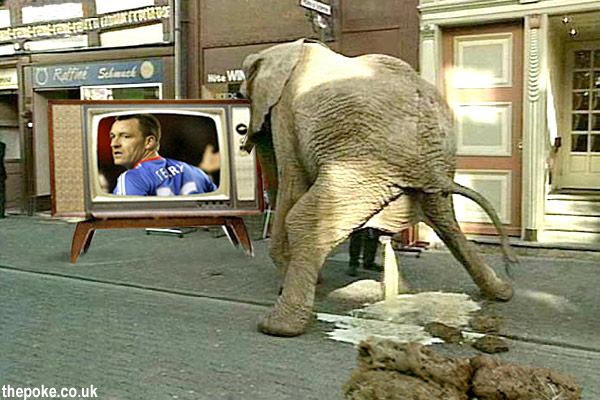 Following the success of Paul the Octopus in the last World Cup, the powerful cabal of animal psychics that now control betting patterns during major sporting events have joined together in a universal prediction of condemnation of the former England captain.

Separately viewing Terry on TV whilst being asked whether he would behave like a tit in the future – off or on the pitch – the animals all urinated copiously and stamped their paws or hooves.  The elephant also did a massive dump, although a Krakow zookeeper said this may have been because Wayne Rooney’s face had entirely filled the screen immediately after Terry had appeared.

The passing of water and stamping is seen as an unqualified sign that these animals foresee Terry will do something stupid – like kicking an opposing player in the back in full view of the linesman, or sleeping with a team-mate’s wife – in full view of her husband.

Major bookmakers in the UK have all now suspended betting at 2-1 on whether the Chelsea captain ‘will behave like a major twat within the next 12 months.’