My Sexy Jubilee with… The Royal Family

When you’re having sex with an 83 year old monarch, you learn a few tricks. I’m not suggesting that I’ve had sex with Queen Elizabeth II: that would be as treasonous as throttling a Balmoral swan, or boiling Union Jacks in a cauldron of bulldog piss. 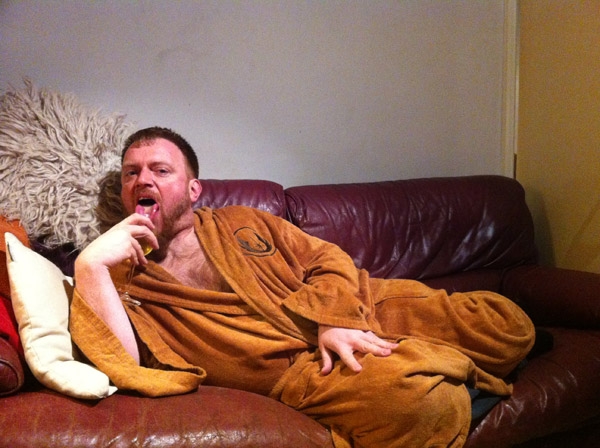 But let me put it this way – I know better than most what it is like to have the jealous eyes of a Welsh Corgi fixed on your buttocks. Jealous eyes that judge you as you realise you’re miles away from the nearest sink, and you’re trying to mash the worst of your smegma into the fabric of your underwear.

All the while, having to deal with the unbearable pressure of a winking monarch pointing at her mouth with both hands.

I was below deck of the royal barge for the duration of the flotilla. It was my job to plump the royal cushions, a palace euphemism that I am bound by the Official Secrets Act not to explain. If you’ll remember the scenes of the day – and surely they are written into the atoms of the universe – there was a moment when the queen disappeared. The BBC presenter said “there goes the Queen, off for a big brown shit”. But let me tell you – a big brown shit was just one of the things the queen wanted.

Appearing below deck, the Queen hopped onto her mobility skateboard and trundled towards me, waving. She glanced suggestively from her hand to my crotch. It was a glance that said “I’m the Queen. I have not been blessed with the liberty to do and say as I please. But should you get on that stepladder and place your tiny penis near my hand, this motion serves a sexy dual purpose. A sexy dual purpose… For dicks.”

She flexed the ring and index fingers of her non-waving hand into a fanny shape, and blew through the gap. I took this to mean she had let rip with a regal queef, and I enthusiastically applauded her.

I had made it half-way up the stepladder when Prince Philip ran into the room. He was being wilful and naughty, slamming cupboard doors and gobbing into the ceremonial urn. I chased him down a corridor and through a few doors, until I encountered the Prince, dressed like an 18th Century prossy from the Wild West. I knew what he wanted, and that I’d get no peace unless I complied.

“Excuse me, madam. Have you seen Prince Philip?” I asked.

Princess Margaret appeared in the kitchen serving hatch, her mouth full of M&Ms. Margaret knows M&Ms aren’t good for her, so this was very naughty of her, but I didn’t have time to reprimand her because Princess Anne had arrived with a wheelbarrow full of basketballs, and was ramming me with her face until I threw one for her.

This is just bloody typical.

By the time I made it back to the main milking chamber, the Queen had gone back upstairs to wave at the public. There was a note on a velvet cushion. “Finished myself off. Check toilet.” I didn’t have to – I could already smell one of the Queen’s panblocking spite turds.

More out of instinct than necessity, I plumped the cushion sadly and had a massive acrobatic wank.

the Diamond Jubilee weekend in 100 Seconds