Technology News: Computer group Lulzsec have hacked the BBC’s Ceefax service in what is thought to be retaliatory act for a number of arrests of its members yesterday. 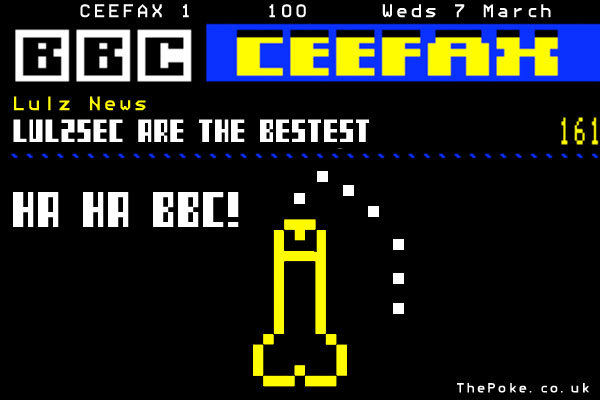 “You deprive us of our freedom,” said one member of the group on Twitter. “Now we will deprive you of news, sport, weather, and TV listings from 3-ish-am to 6 am every morning.”

The Ceefax pages have been replaced by a message from Lulzsec and a crude 8-bit penis, which the group says represents the ‘puppet BBC acting as the lapdog of the totalitarian regime which controls us all’.

The BBC said it’s engineers are attempting to regain control of the Ceefax service, but many of them had forgotten how it works and what it is exactly.

“I can’t believe it’s still around!” said a spokesman for the BBC. “It looks like one of those computers my Dad had in the 1980’s. Maybe I should call him up and ask him where the off switch is?”