Royal News: Prince Harry got himself in royal hot water today after tweeting out a picture of the Queen relaxing at home without her make-up on. 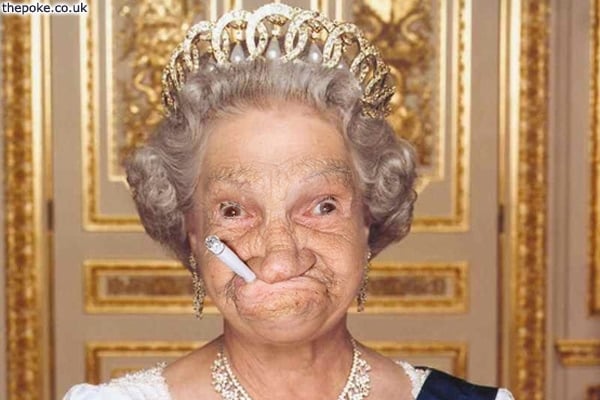 This intimate portrayal of the monarch performing her favourite party trick – gurning – has been branded as ‘too intimate’ by palace officials, and Harry can surely expect a severe reprimand for breaching intimacy guidelines.

‘Look at Grandma love it when she done vis LOL’ ran the Prince’s tweet, giving away a secret that only a small circle of royals and attendant staff previously knew: Queen Elizabeth II is an excellent gurner.

“People may think otherwise,” says royal commentator Toby La Zouche, “but in this Diamond Jubilee year, I think it does the crown no harm to show this all-too human face.”

“Yes, she can gurn, as well any Cumbrian marra at the Egremont Crab Fair, and the British people should be able to share in such knowledge. Diana used to a wonderful impression of a goat in a suitcase, and Prince Philip can stick the price of 20 Benson and Hedges in 50ps up his nose.”

the greatest thing to happen at a KFC, ever

Crisps taste better if you open them from the bottom