River Cottage News: Legendary chef Rusty Lee has been discovered by rescue workers in a makeshift cell deep within the wine cellars below River Cottage. Members of the Devon and Somerset fire and rescue service made the shocking discovery this morning while tackling a blaze at Hugh Fearnley-Whittingstall’s headquaters near Axminster. 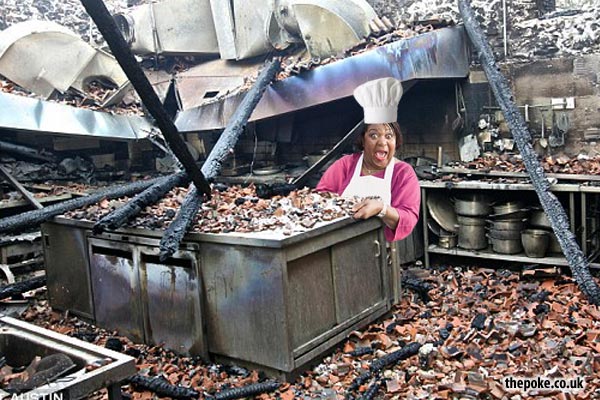 Jamaican-born Lee, whose bombastic culinary style dominated TV cookery throughout the 1980s, hasn’t been seen since Living TV’s ‘I’m Famous and Frightened!’ in 2004. Today she emerged defiant, accusing Whittingstall of kidnap and being held against her will.

“I was subjected to constant interrogation as Whittingstall attempted to discover the spicy secrets of Caribbean cuisine,” Lee told a crowd of onlookers.

“I was taken from my home, bundled into a van and then found myself in a reasonably comfortable room stacked with home-made apple juice. But nothing on this earth will make me reveal my grandmother’s recipe for jerk goat – I don’t care how many ethically-sourced pork pies infused with wild garlic get shoved in my face.”

Jeronimo Jones and the Video Clones