Hotel News: In an unprecedented move that could signal a sea-change in foreign policy for the Democratic People’s Republic of Korea, the hardline communist government in Pyongyang has allowed budget hotel chain Premier Inn to open 400 hotels across the country. 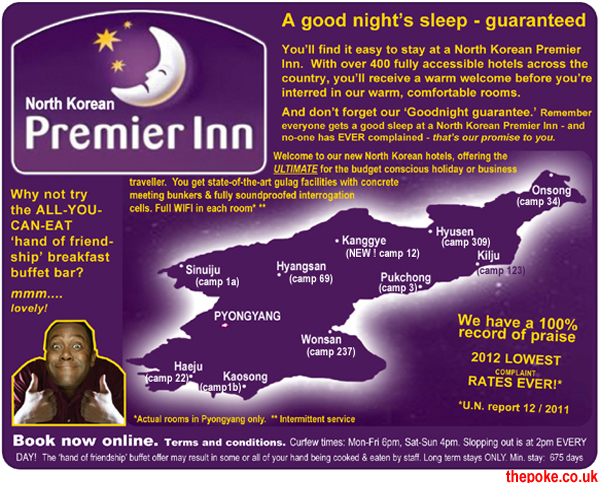 The world has been waiting to see which direction the new regime of Kim Jong Un will take, and leasing their entire internment camp network to the budget hotel chain is widely seen as a progressive move away from its historic isolationism.

Premier Inn say their North Korean branches will offer the typical deals that UK travellers enjoy while retaining a uniquely North Korean feel. There will be minimum stays of 675 days and slopping out at 2pm.

An advertising campaign featuring Lenny Henry has already been filmed, and is believed to show the Comic Relief star giving the thumbs up to a United Nations buffet of rice and sanitary towels, before being dragged by his feet into a soundproofed concrete bunker and beaten to death following 10 weeks of questioning. Booking lines are open now.