Michael offers Facebook £1m to opt out of Timeline

Facebook News: “There are some things I’d just rather forget,” said George Michael today as his offer of £1m to opt out of Facebook’s new Timeline feature went public. 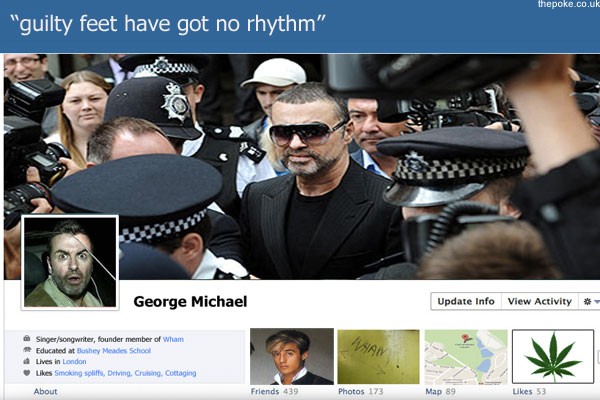 Timeline, which Mark Zuckerberg announced today will soon become a mandatory rather than voluntary part of the Facebook experience, means that your entire history will remain permanently visible, prompting criticisms of privacy invasion, Big Brotherism and being the nauseating leader of a cult of insane, power-mad shitheads.

But George Michael said he didn’t want to get ‘bogged down in the philosophy’ of what was happening – he just wanted out.

“Look,” the troubled star told journalists outside his home, “if it was the odd picture then fine, but there are whole periods I’d rather not be reminded of – most of 2006 for example.”

“What I’m saying is ‘here’s a million, now leave my shit days in the drawer, thank you very much.”

And if Zuckerberg refuses?

“Imagine George Michael breaking into your Silicon Valley estate armed with a blowtorch and a bucket full of hot dogs,” said George Michael.

“You’re in bed, I’m sining ‘Careless Whispers’ in falsetto, I’ve got a camera and there’s nowhere to hide. You want that shit on my fucking Timeline forever? I think not.”