Sports News: Controversial Premiership footballer Joey Barton has become mired in a fresh controversy after getting involved in a heated online debate with God. 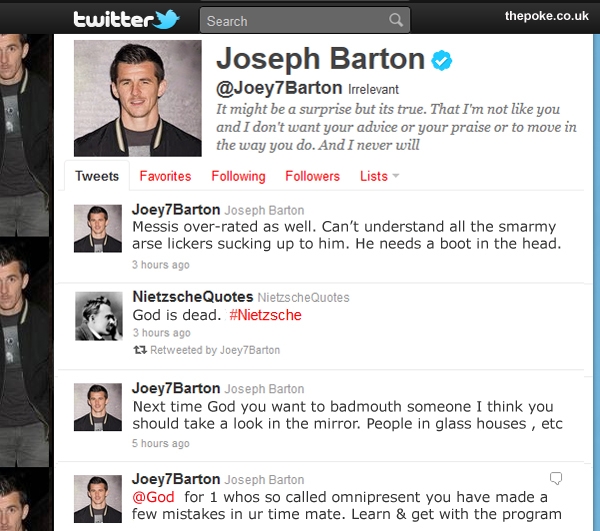 The 29-year-old star blasted the omnipresent deity following a heated exchange of tweets, with Barton accusing God of ‘disrespecting him’ and not believing in his ‘undoubted talents.’

Avoiding a major theoretical debate on religion because of the 140-character limit on twitter, Barton labelled the immortal ‘an embarrassment’ and said he should ‘take a long, hard look in the mirror’.

Before God had a chance to tweet back with a suitable riposte, Barton stole in again, firing off a quick hit-list of various disasters such as 9/11, the holocaust, Rwandan genocide, the Black Death and his own imprisonment – as proof of His failure to intervene and ‘save innocent people’s lives.’

The QPR midfielder then proved his hefty intellectual credentials by re-tweeting the famous Nietzsche quote ‘God is dead’, and almost quoting correctly from The Bible: ‘people in glass houses, etc.’

In the past, Barton has variously criticised Allah, Buddha, the Dalai Lama and even Jose Mourinho for ‘not being all that.’