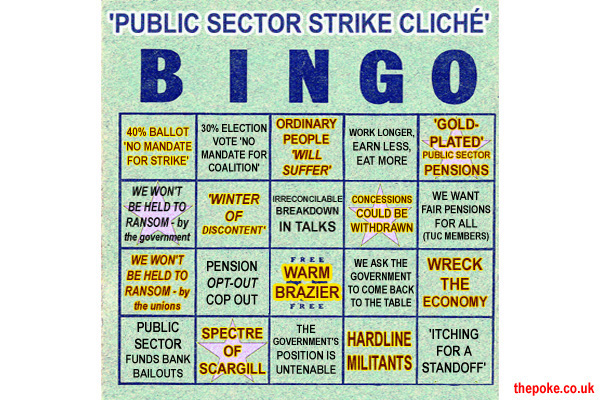 Whether you’ve had to take a day off work to look after the kids or you are simply stuck in Heathrow sicking up all the Burger King, this little bingo card will get you through today – just think of it as preparation for 2012, when everything will close down permanently.

Pay attention to the news coverage, or to the speeches if you are on strike, and whenever you hear one of the well-worn phrases, mark your card. BINGO!

A full line across wins a weekend trip on a Russian oligarch’s yacht off the Amalfi coast, rubbing shoulders and sun cream into the likes of George Osborne & Peter Mandelson.

A full line down wins a traditional Soviet-era family holiday in January on the beach in Odessa, swimming alongside Russian miners before being admitted to hospital for hypothermia and radiation sickness.