PM struggles to tell child what a vagina looks like

Cameron News: A red-faced Prime Minister was caught off guard this morning when he found himself unable to describe a vagina to a child. 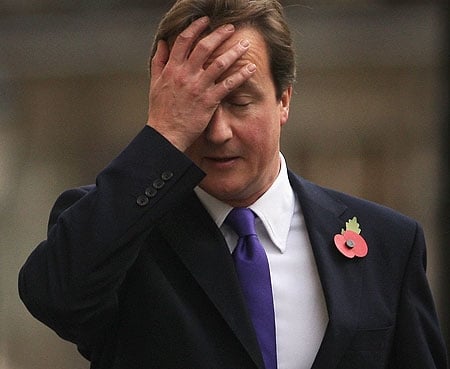 Cameron had just completed a tour of Carlington Plastics, one of a handful of firms that have moved to Birmingham to take advantage of its new status as an economic investment zone.

He was meeting local people outside the factory when the crowd was approached by a group of youths, including one nine-year old boy who repeatedly called the Prime Minister a ‘cunt’.

In an effort to diffuse the situation, Cameron quipped to his audience that he doubted if the boy even knew what a ‘cunt’ looked like, and though chuckles from the ministerial entourage momentarily gave Cameron the upper hand, he was soon on the back foot when the boy agreed with him – and asked the PM to describe one for him.

“You know, it’s a bit, well, from one angle – I mean I -” Silence gripped the crowd, and even those security personnel who had been trying to get rid of the youths stopped and stared at their elected leader growing increasingly hot and bothered.

“You don’t know, do you?” said the boy, and just as everyone was dissolving into laughter, Cameron shouted out loud, “It looks like a BADLY FOLDED KEBAB!”

“I was absolutely stunned,” said one eye witness.

“I could hear a couple of elderly people actually retching, but the rest of us was all looking at each other thinking ‘did he really just say that?’ Next thing you know he was bundled into the back of a car and they were off.”

In a statement, Number 10 has apologised to the boy and his parents, while insisting that most of the blame lies with the previous government:

‘While the Prime Minister accepts that his description was inappropriate, the situation itself was a perfect example of the legacy of crisis and confusion left by the last Labour government.’

‘The Prime Minister would like to make it clear that he does know what a vagina looks like.’

‘The suggestion that he, or anyone else in the cabinet, does not know what a vagina looks like due to the unreformed sexual traditions of Conservative ministers – in the dark wearing a ski suit and gloves – is at least 50% incorrect.’

How to achieve things