Sports News: Former Italian Prime Minister Silvio Berlusconi said today that he is ‘overjoyed’ to be back in showbusiness, after he was revealed as the new anchor on Sky Sports’ flagship football programme. 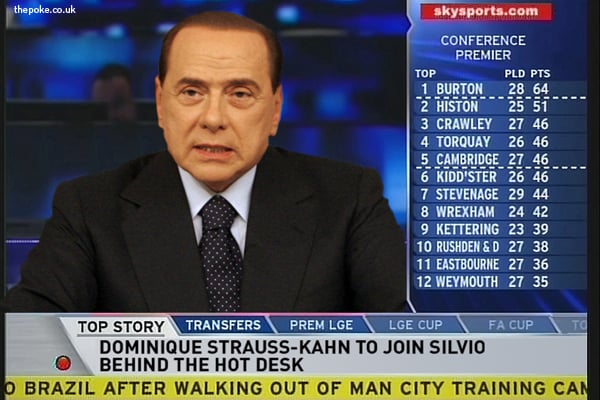 The show has been in limbo since the Richard Keys and Andy Gray ‘Smashitgate’ scandal, but Sky said today it is thankful that a ‘steady pair of hands’ is now on one of their prize assets.

Mr Berlusconi, who formally left power at the weekend while calling for a ‘mass debate on the global economy’ is said to be ecstatic.

Though his English is poor, Berlusconi will communicate his ejaculations via instant translation, much like the England football manager, Fabio Capello.

The Italian media magnate said he was getting ‘over excited’ about covering his first game, which is slated in as Oldham v Bristol.

“I’m salivating over the prospect of these games. I’m sweating just thinking about it. I find the whole prospect incredibly stimulating,” he said whilst adjusting the crotch of his trousers and wiping a bead of sweat from his brow.

Sky Sports are said to be so happy at securing a big name to take over their headline show, they have already agreed to several of Mr Berlusconi’s suggestions, including a new women’s football segment called ‘Snatch of the Day.’

NEXT >> The World’s Greatest Album Covers, Ever