Dictator Watch: Zimbabwe’s President Robert Mugabe is reportedly shitting himself over the fact that now Muammar Gaddafi is dead he might be next. 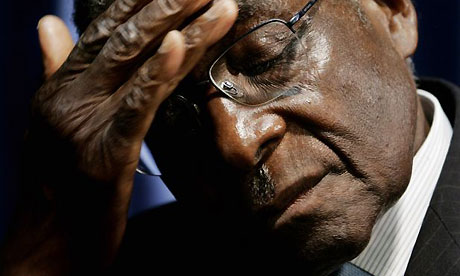 Mugabe reportedly reacted to the news of the former Libyan leader’s death by cradling his head in his hands and crying “Oh shit oh shit oh shit oh shit.” Unconfirmed reports suggest he then poured himself a large whiskey before locking himself in the bathroom.

“Robert’s really worried that he’ll be next,” said Mugabe’s butler Sandy. “It’s so sad. He hasn’t been himself lately – he barely touched his fish fingers at dinner. He was just aimlessly pushing the peas around on his plate.”

“Logically Turkmenistan leader Saparmurat Niyazov should be next, but let’s be honest – Mugabe is much easier to pronounce and spell.”

NEXT >> 49 Ways To Celebrate Halloween