Libya Update: As forces loyal to the National Transitional Council of Libya raised the flag in the city of Sirte, a major UK retailer, embedded with the rebels, has already established a foothold in the former Gadaffi stronghold. 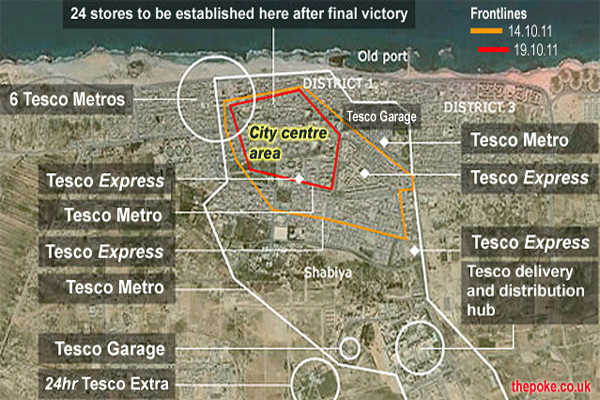 As news emerged that the Colonel himself had been killed after being found in possession of a Sainsbury’s gold loyalty card, Tesco have managed to erect several of their smaller Express stores directly behind the front line as they ‘went in’ with rebels inching towards the city centre, and are planning a large ‘Extra’ store for the outskirts.

In what will be seen as a coup against its big supermarket rivals, the retail giant say they are happy to be involved a process that will see the city ‘return to normal and enjoy the fruits – and vegetables – of democracy as soon as possible.’ Tesco expect to follow the UK supermarket model and open up to 30 stores of differing sizes in the city – about 1 store per 5 citizens.

Tesco boss Philip Clarke flew in this morning and surveyed the scene. Standing amongst thousands of cheering Tesco supporters clutching their 2-for-1 deals, he told reporters; “Whilst Sainsbury’s, Waitrose and Morrissons are still stuck in capital Tripoli, we’ve smashed our way into the heart of some new, virgin territory that was unavailable to us under the old regime.”