Booker News: Despite being a number one bestseller and 3-1 favourite, the critically acclaimed one page suicide note by Lawrence Kilgore narrowly failed to win the Booker prize this evening, coming in at a comfortable second place behind housewife’s heartthrob Julian Barnes. 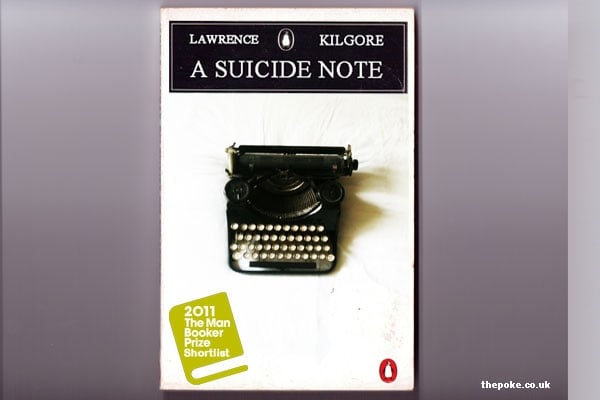 In both the first and last of our series, The Poke talks to the author about his life and work:

How did you start writing suicide notes?

I was depressed and one of those, ‘Why Not Be a Suicide Note Writer’ ads caught my eye, so I thought, ‘I’ll give that a whirl’.

Not at all. My early attempts were pretty dire. ‘Dear Mum, Dear World, Goodbye cruel world’ – all the old clichéd crap. At the time my friends joked, “You couldn’t write a suicide note to save your life.”

Did feedback from family and friends have a positive effect on your work?

No. I posted all of my suicide notes to my dad. He didn’t like any of them. In the end he put a sign on his front foor saying, ‘No Hawkers. No Circulars. No Suicide Notes’.

And I stopped emailing them to my girlfriend when I got an auto-reply saying, ‘I will be out of the office forever, please send your rubbish suicide notes to Katie in Accounts’.

My friends just yawned when I stood on a chair with a noose around my neck and read out my latest suicide notes at their birthday parties.

“You’ve got to face facts,” my dad said. “Nobody likes your suicide notes.”

How did you write the masterpiece that was shortlisted for the Man Booker prize?

Like anyone else writes a masterpiece – I got blind drunk and bashed the keyboard in a rage. Then I screwed it up and threw it in the bin. Then I ate a kebab.

Waking up the next day, I was shocked to see the newspaper headline, ‘Mystery suicide note takes literary world by storm’. My work was a big success, but I wasn’t being credited for it. It was the last straw.

So, at the end of my tether, I resolved to do that horrific unthinkable thing… The last resort… My final act of utter desperation… I went round to see my mum.

Turns out she’d come round, found the note in my bin and sent it off to an agent. It was only a formality getting the agent to attribute the work to me. Then Bob’s your uncle, it sold 5 million copies in the first week and was shortlisted for the Man Booker prize.

Kilgore has since set up ‘Infamous Last Words,’ a copywriting agency specialising in writing bespoke suicide notes at competitive rates.

NEXT >> 49 Ways To Celebrate Halloween