Somali News: Mogadishu’s Butlins is to shut at the end of this year’s holiday season, a spokesman for the company has announced.

In another body blow to British business, Butlins Somalia, which operates the only Butlins in the Horn of Africa, has taken the decision to close the resort permanently at the end of 2011. Reasons for the closure include include the the global recession, a sharp drop in new holidaymakers, and the disappearance of their existing customer base. 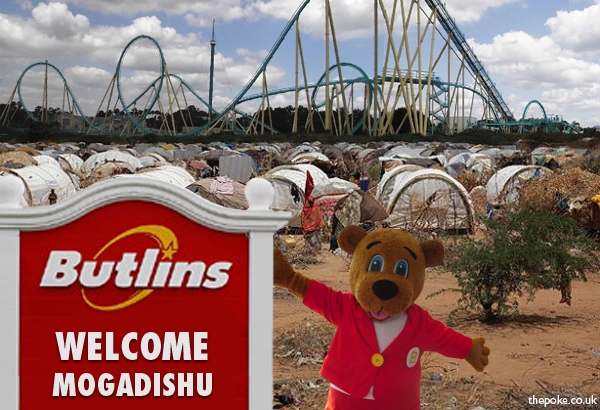 Despite a new monorail and the introduction of an excitingly overpriced menu by Heston Blumenthal, the well-versed promotional promises have failed to deliver the necessary numbers.

The resort will have to shut it’s doors for the final time on December the 24th, with the loss of over 200 jobs.

“We’ve had a terrible summer. Nobody seems to want to come here at the moment. The occupancy levels are at their lowest they’ve been since we opened in 1976,” confessed a sad general manager Keith Flynt.

“To be honest, it has been tough for a long time now but for the life of me, I can’t understand why we haven’t managed to hang on. We’ve tried everything; donkey rides, the monorail, a miniature railway. We’ve got the sun, the sea and the sand – but it’s all been for nothing.”

Many will be sad to see the demise of the last Butlins on the African continent, and wonder whether the area will ever see a return to the traditional games they were famous for, such as the knobbly-knees competition and the Miss Butlins gala.

Travel guru Simon Calder agrees, pointing the finger at the recent removal of the under-12’s donkey rides on the beach.

“People have been put off by the removal of the donkey rides – apparently they were blasted to bits by RPG’s and eaten by invading Somali militiamen last month – and for many hard-up families, that may have been the final straw.”