American News: Parents, school teachers and reputable medical practitioners from all across America spoke out today against the growing trend of children getting plastic surgery to look older. 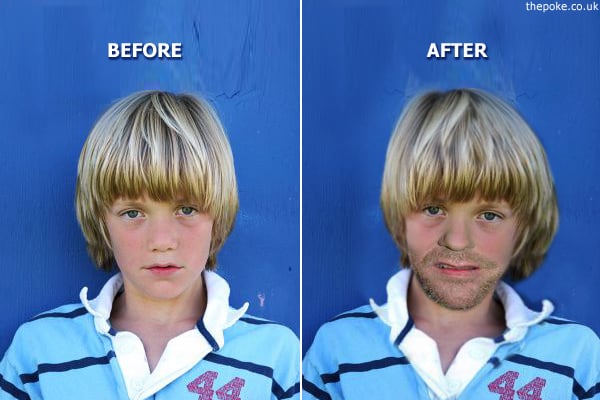 “Its the best thing that’s ever happened to me” says Kyle Mackintosh, a ten-year old from Nevada who has recently had a beard implant, skin wrinkling treatment and his voice-box retuned.

But despite the increased self-esteem, campaigners are demanding an end to the treatment, calling it ‘wrong’.

“Kids want to buy cigarettes,” says Californian youth worker Bill Hopely. “They want to buy alcohol. They want to have sex. All of these things are harder to come by if you are eight years old.”

“Unfortunately there are some parents who will just give in to their kid’s demands, however outrageous. We’re seeing more of these procedures being done every year and we want it banned. It’s too weird to be legal.”

Not all the protesters, however, are prepared to wait for the courts.

“We want those surgeons who perform these operations to be named, shamed, and, if necessary, shot,” says mother and Christian, Irene Wrangler, a veteran of the anti-abortion campaigns of the late 1990s.

“If God made man in his own likeness, then changing a child’s face is basically vandalising God’s face, and anyone who dares to fuck up God’s face deserves to have his skin flayed off then thrown into a vinegar bath while their entire family is executed in front of them. That’s what it says in the Bible.”

Snaps of the Summer (Vol 4)