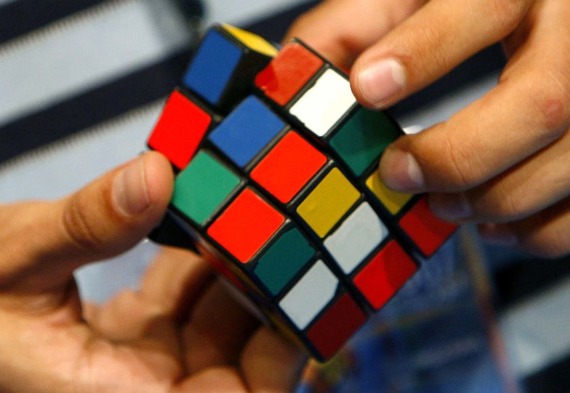 But as the great and good of the Rubik’s Cube world rose to their feet to applaud his historic achievement, Brady was seen sitting down with a glum look on his face as the “utter meaninglessness of the whole thing” pierced his young heart.

“I can’t cook,” Brady told journalists, “I can’t drive. I failed all my classes at school. I’m a virgin. Last week I tried to mow my Dad’s lawn and basically I shaved our dog to death.”

“The only thing I’m good at has no application to the real world and no relevance outside itself. I’m the best at the Rubik’s Cube – so fucking what? Somebody else is the best at spitting, or throwing nails in a basket from twenty yards away – don’t you get it? It’s so fucking useless! Oh my God I’ve wasted so much time on this shit…”

As a sobbing Brady was lead away from the podium, other former champions shared their experiences of what they call ‘Cubism’.

“It’s like you’re practising and practising for this one thing your whole life, and then you get there,” says Jane Helt, former world record holder for solving the cube underwater while needing to pee.

“Then you win the title, there’s this massive euphoria, and suddenly life just seems so empty. It can drive you insane if you let it – like poor Chuck Hobart.”

Former speed champ Hobart killed himself in his apartment in 1992. He had pulled out his own eyeballs and was found dead with his hands in the sockets, gripping his brain.

“Chuck wanted to solve his brain like you solve a Rubik’s Cube,” says Helt. “Let’s just hope Julius doesn’t go down that path because for a kid with his talent there are plenty of challenges left. Solving a Rubik’s Cube during a motorbike accident, for example, or training a dog to do it, or doing it with his tongue.”