Reader Offer makes first ever profit for The Guardian

Guardian News: Buoyed by their moral triumph over News International, it was more good news for The Guardian today as it reported it’s first ever profit following unprecedented demand for its ‘worry beads’ reader offer. 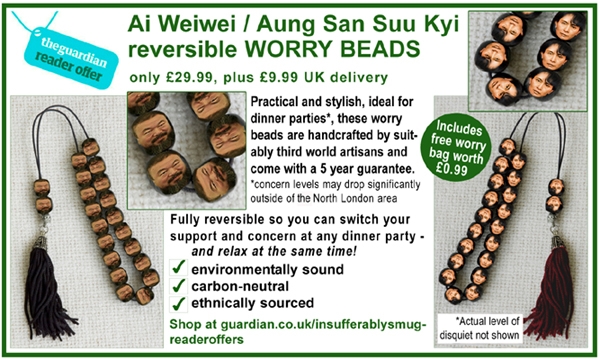 The Ai Weiwei and Aung Sang Suu Kyi Reversible Worry Beads have been so popular that in the first financial quater of this year the paper actually posted a net profit of £17.50.

The beads – which are reversible depending on who is focus of your concern – have become something of a craze amongst the middle classes and have been spotted around the wrists, necks and even waists of influential celebrities like Bono, Chris Martin and Peaches Geldof.

The Chinese artist Ai Weiwei said today that the thought of Guardian readers who were not only concerned, but actually worried about him – and sometimes even downright peeved about the whole bloody situation – was often the only thing that kept him going through those long, dark months in prison.

Editor Alan Rusbridger said he was ‘delighted’ at the results.

“Never has the newspaper business seen more tempestuous times. We have been struggling with how to tally our journalistic principles with the realities of the internet and if that means stapling some organic rosemary to the front of every paper or selling downloads of Sting whispering sexy things to a pig, then so be it.”