The A-Z of Office Slanguage 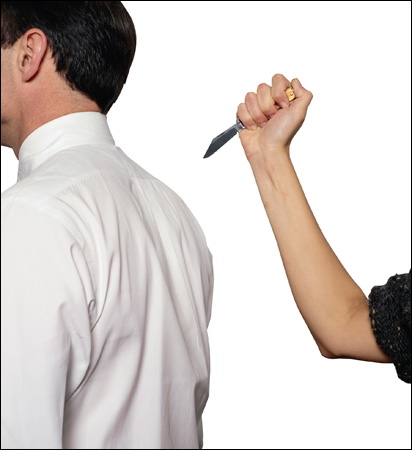 Business: The modern office. You stand by the water cooler. You play on the internet. You build piles of things, then knock them over.

It’s an Attenborough-worthy environment, and as such has spawned many a new word, clambering for inclusion in the dictionaries of the future.

We want your help to compile a full compendium of the office slanguage that lets us all get through the working day.

Please tweet us or drop us an email… the good one’s will be added to the directory.

Adhocracy – a department with little to no process or organisational ability

Administrivia – vitally important stuff that managers leave to everyone else

Agenda Bender – a co-worker who is easily side-tracked in meetings.

Brandalism – sticking company logos on everything and anything

A Buellerlemic – an employee addicted to throwing a sickie (via @the_wonderer)

Chartist – an accountant with a deep love of graphs

Chinese holiday – taking a five minute break by faking the need for the loo and just sitting on a china latrine, head in hands

Cybernating – snoozing at your computer

Deja-moo – bullshit that you’ve heard before

Delegut – A representative at a conference whose sole contribution seems to be that of demolishing the lunch buffet. (@alienonline)

The Dopeler effect: Tendency of stupid ideas to seem smarter when they come at you rapidly (via @liencam)

Ego-Surfing – Searching Google for instances of your name. (via @andybwhittle)

Flashturbation – self-congratulatory and excessive use of animation in Powerpoint

Fleemail. Email delegating responsibilities whilst avoiding confrontation, sent just as your boss is about to leave (via @alienonline)

A Friday FOE. Someone who tends to leave early for the weekend. (ie Fucks Off Early) via @YouNoPayMeBunt

Googlenosis – looking up symptoms on the web to make your sickie more believable.  (via @FullMetalAnnie )

Google Zoo – when an entire office is pretending to work

Horizontal Promotion: climbing the career ladder while laying on your back. (via @ GazzaB162)

iTea department – a group of individuals who break up their day with excessive kitchen loitering. (viathe_wonderer )

Kebab manoeuvre – packing up low quality products, heavily marketing them and selling at an elevated price

A Middleton – posh, pretty dimwit in the marketing dept who is only killing time until she marries into money  (via @mothmun)

Mushroom Management. Keeping staff  in the dark and covered in shit. ([email protected]matwhite80)

Open Kimono – throwing an idea out, but being open to criticism

Pope-ing it – when losing the real argument during a meeting, to take the moral high ground

Putting socks on an octopus – an impossible task

Shirking from home (via @texanbar)

Stroperator – the mardy bitch on reception with an over-inflated sense of importance. (via @abbiehas)

Teahydrated – the urge, nay the need for tea (via @will_woodward)

Teflon Shoulders – nickname for co-worker who offloads work to others, a drop of the shoulder and it slides off onto someone else (via @RobWeatherhead)

T.W.A.T – a person who doesn’t work Monday or Friday – only Tue Wed And Thu (via @martinmitchell )