Diet Your Way To A Bigger Penis

Retail News: They say size doesn’t matter, but when it comes to books sales it certainly makes a big difference – that’s the view of publishing industry experts who are heralding a self-help sensation as the ‘saviour of the shelves’. 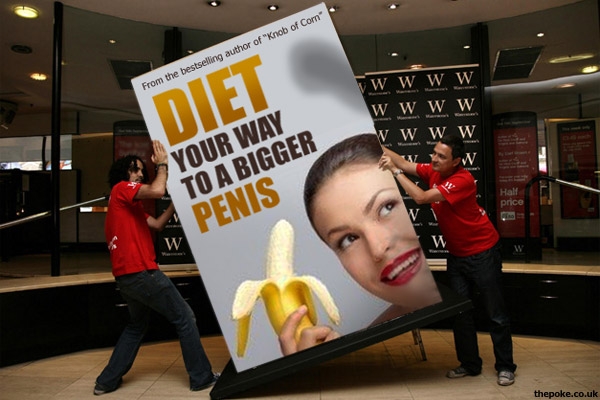 ‘Diet Your Way To A Bigger Penis’ by the Swiss Doctor Erika Habelstreem has blazed its way to the top of the book charts all over the world, outstripping Harry Potter records by a factor of ten.

It has revolutionised the fortunes of independent publishers Jackworth and is now being credited with single-handedly throwing a lifeline to embattled high street chains like Waterstones and Borders.

“It’s nothing short of amazing,” says Waterstones Rotherham’s manager Jessica Cowley. “The queues go around the block. Wives mostly, and teenage boys – literally thousands of them.”

Its supporters claim that the diet can double the size of any penis within one month. Critics however say that the secret ingredient is just a ‘sophisticated hallucinogen’ that simply makes ‘everything look bigger’.

“Frankly, book shops were going the way of record stores and walk-in toupee fitters. Now our pockets are bulging again – all thanks to a tiny woman from Switzerland with problems at home and the scientific vision to do something about it.”