The Arts in Crisis: Tension mounted in the West End yesterday afternoon as Israeli forces smashed their way into London’s Theatreland. 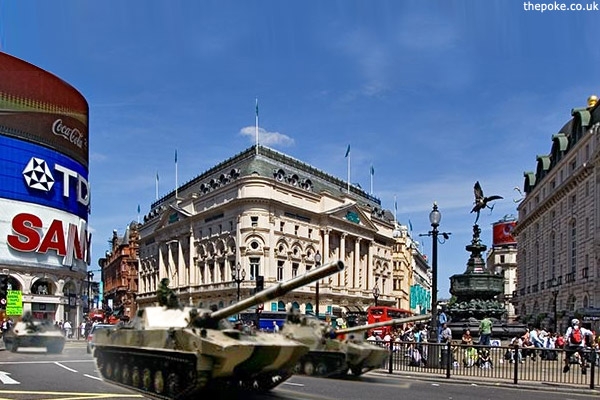 Israeli Prime Minister Benjamin Netanyahu said that the West End’s ‘heavily made-up’ protestors ‘armed with stage props’ and a brazen belief in treading the boards ‘no matter what,’ presented a clear and present danger to Israel’s sovereignty, making a preventative invasion `unavoidable`.

As Israeli tanks ground to a halt in traffic on Shaftesbury Avenue, soldiers continued on foot to set up checkpoints in and around Theatreland’s new ‘Demarcation Zone.’

It is now very difficult for people to move in and out of the area – leaving little practical difference for theatregoers. However, as Prime Minister David Cameron rang Mr Netanyahu for ‘a full and frank discussion’ about why the Israeli army was encamped in an area 6,000 miles from its homeland, fearless actors and stage technicians insisted that `the show must go on.’

Despite the warnings, curtains were raised in several theatres – prompting swift action from Israeli troops. After 59 years even The Mousetrap was finally forced into its thrilling conclusion when security forces descended from the lighting gantry and shot the entire cast dead. Writing in The Evening Standard this morning, theatre critic Henry Hitchings described this final performance as a ‘real joy’ and ‘a treat for all the family’.