US News: Los Angeles woke up to a shock this morning as the iconic ‘Hollywood’ sign lay largely destroyed but for three remaining letters: ‘LOL’ – the popular social media acronym for ‘laugh out loud’. 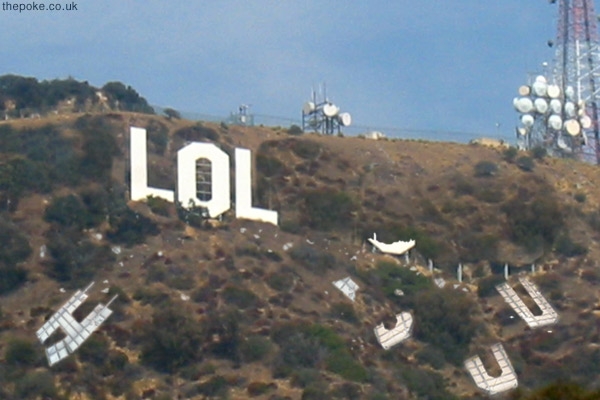 The guerrilla pranksters – who at this time still remain unknown – worked under the cover of darkness, at what local law enforcement is describing as ‘lightning speed’.

When the giant letters were seen falling by horrified residents, police arrived on the scene ‘within minutes’ but the culprits had already disappeared. They left only the evidence of heavy machinery and ‘a small mountain’ of empty beer cans.

The internet is already awash with rumours about who is behind the stunt. Top of the list is Mark Zuckerberg, with several sites claiming that it was an act of revenge for The Social Network movie.

‘That film portrayed Mark as a loathsome, backstabbing, greedy, and occasionally amusing, hyper-nerd’, says social media gossip site blognostrils.com. ‘How wrong can you get? Mark is not amusing at all.’

Others think there is a darker motive.

‘The internet is bigger than Hollywood and Zuckerberg wants them to know it and admit it’ says @righteouschild on twitter.com/iknowwhatsupyoudon’t. ‘Facebook is the Hollywood of the internet. In fact it’s more like Mecca, or Middle Earth or Jerusalem. By sticking LOL, the No. 1 buzzword for the social media generation, up there on the mountain he’s basically saying ‘I’m the digital Moses and here are my tablets – ones a Samsung Galaxy, the other an iPad 2’.

Hollywood itself is in a rage.

Christian Bale is reported to have hired a paramilitary Brazilian death squad to hunt for ‘the disrespectors’ while Mel Gibson has blamed Whoopi Goldberg. She in turn has blamed Will Smith, who is reportedly writing a rap about the incident that will blame Matthew McConaughey and/or Banksy.