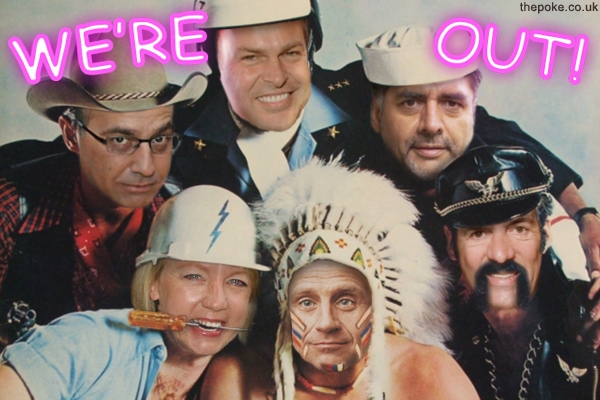 Theatreland insiders say it’s his strongest outing since ‘Phantom’, stuffed full of hit tunes, many of which he co-wrote with Dappy from n-dubz.

‘Watch U Take Me 4?’ and ‘Get On Your Knees And Beg (G.O.Y.K.A.B)’ are both tipped to be chart smashes in their own right, but much of the excitement is centring around the finale: The Dragons will peform a blistering new version of the Village People’s ‘YMCA’ – remixed, rearranged and renamed as the title song ‘We’re Out!’.

As another rejected entrepreneur throws himself down the stairs in despair, the Dragons strip off their suits to reveal colourful costumes, embarking on a dance routine that will show, once and for all, just how flexible Duncan Bannatyne really is:

Your invention’s no good

Your presentation was poor

Throw yourself down the stairs

Initially wary of the project, the Dragons were persuaded to take part not just because of Dappy’s involvement, but also the large amounts of money involved.

“We came to a decision by pitching ourselves the idea,” says tycoon James Caan, who recently quit the TV show but just “couldn’t resist rejoining the line-up for this slice of musical history.”

“We all sat down in front of a large mirror,” explains Caan, “and ran through the proposition.”

“At first we were all quite hostile towards ourselves, but after we had answered some of our own tough questions, and had proved to ourselves our own money-making potential, we congratulated our reflections, wholeheartedly backing our own concept. Were we out on We’re Out!? No. We were in.”

next story
Breaking News: The hilarious video of this dog 'working from home' is 15 seconds well spent