Angel of the North turned into Batman 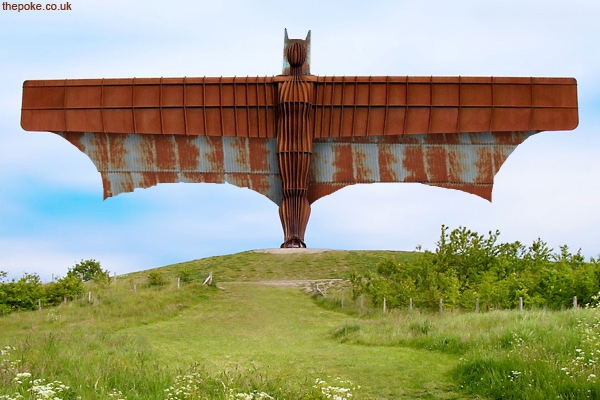 Whoever is responsible, Gateshead woke up this morning to find that it’s iconic landmark, Angel of the North, had become Batman of the North – thanks to some new metal sheeting riveted to to the original statue.

“There must have been a team of them,” says Detective Inspector Roy Card.

“Highly organised, highly skilled. Possibly ex-military. Well-versed in the arts of stealth – vandals, in other words. Supervandals. They did the whole thing at night. No reports of lights on the hill. No reports of suspicious activity of any kind. They perfomed a complex industrial operation then faded into the night like smoke. Like ninjas made out of smoke.”

The statue, which looks over the A1 and A167, is drawing record crowds as visitors rush to see the ‘Gateshead Batman’ before he is returned to his former self.

“We used to call it the ‘Gateshead Flasher’,” said local resident Peter Murphy. “Perhaps once this is over, they’ll call it ‘Bruce Wayne’.”

“I know they’ll take the bat wings and hat off soon but I think it’s fantastic. The kids love it and who knows, perhaps it’s striking fear into the heart of local criminal masterminds. There’s one in Bensham. There’s definitely a couple in Wrekenton.”

Next >> Batman – The Cultural Legacy