ART NEWS: Banksy, the Scarlet Pimpernel of the art world, succeeded last night where many others have also succeeded – and made a cock out of Number 10.

Outwitting security that includes multiple CCTV cameras, armed response units, radar, air support and a bobby on the doorstep, the publicity-hungry/shy graffiti artist somehow left one of his trademark stencils at the door of power last night – causing an immediate media storm. 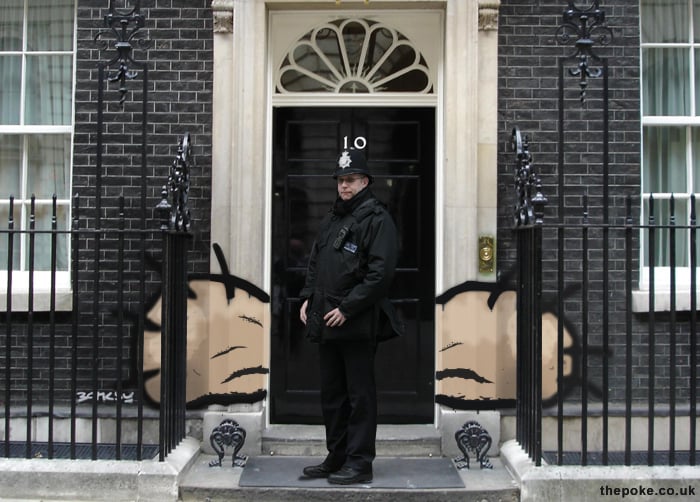 “Is it art?” frothed Guardian correspondent Giles Harbinger, “or is it vandalism? Or is it, in fact, the free and sane expression of the people’s feelings towards their governors?” The Daily Mail heralded it as a shocking indictment of the benefits culture. The Star recreated the image with some models.

This morning the Metropolitan police were unclear as to whether they would be issuing a warrant for Banksy’s arrest, following ‘mixed messages’ from Number 10 itself.

“Well of course it is embarrassing,” said a cabinet minister who asked not to be named,” but then again the value of the house has just gone up by about half a million pounds. Money is tight these days so, you know, and to be honest the Treasury is saying ‘well hang on a minute, lads – there might be something in this…’”

NEXT>> Mad Men Mr Men or The Week In Pictures