In a stunt that has left the art world baffled, notorious street art outlaw Banksy last night followed the success of The Simpsons intro by projecting an image of former Republican vice-presidential candidate Sarah Palin along with the slogan “YOU BETCHA” onto the surface of the moon at 10pm Eastern Standard Time, for 10 minutes. 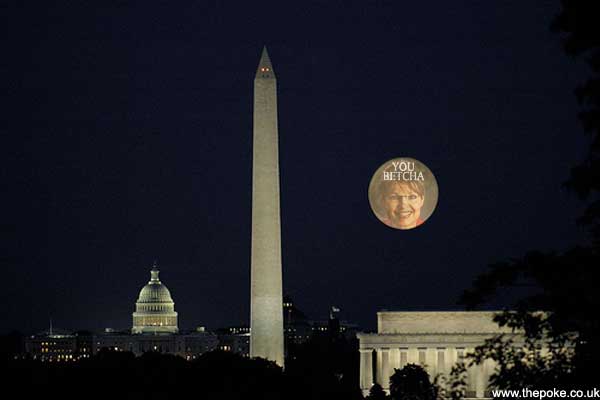 The projection came from an unknown location, apparently using technology ‘available only to the super-rich’.

The former Alaska governor, darling of the Tea Party movement and hotly-tipped to run for president in 2012, would not comment on the stunt except to say “what moon?”.

Nathaniel Bunt, respected critic and judge of the Turner Prize was left confused. “You can never tell with Banksy,” Bunt said, “this is either a rallying cry for the disenfranchised right-wing in America, an ironic comment on the depressing standard of political debate, or just an enormous, pointless piece of moon-bothering.”

Reaction across the world ranged from astonishment to indifference, and then headed back to total apathy via waning concern. In America itself a noted increase in gunfire during those ten minutes sent a clear signal either of disgust or approval, depending on the state.

Lightsaber duel in a London office