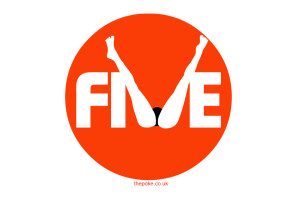 Off the back of today’s cost-cutting ‘bloodbath’ Channel Five’s new proprietor, Richard Desmond, has unveiled a £15 Million brand overhaul for the beleaguered broadcaster.

The outgoing chief executive, Dawn Airey, famously linked the channel with the “three Fs”, saying it was about more than “football, films and fucking.”

“Of course I’m not going to mess with the brand,” chuckled new owner Richard Desmond to an excited press conference as Channel Five unveiled its new logo today, “I’m just going to drop the football and the films.”

The top shelf tycoon, who bought the troubled TV channel from RTL for £103.5 million, said that after considering numerous options he had chosen this logo because it symbolised “being wide open to the future” and should reassure all concerned that Channel Five would continue as an important “pubic service broadcaster.”

“We live in a new age,” Desmond added, “an exciting digital age, and if that means Pop the Question Time and 3-D topless darts then who am I to stand in the way of progress?”