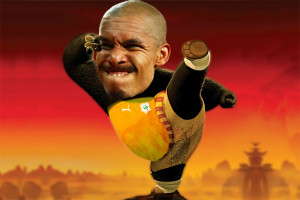 The Dutch football team is to compete in a no-holds-barred mixed martial arts tournament held on a remote island off the coast of South East Asia, it was announced today. After being vilified by the world’s media for their over-physical approach in the World Cup final against Spain, Holland coach Bert van Marwijk has announced plans to turn around the teams misfortunes.

Says van Marwikj, “I was standing at the sidelines, watching Nigel de Jong give Spain’s Xabi Alonso a good chest-kicking, and I thought to myself – why don’t I just get the boys to compete against some of the world’s best martial artists in a deadly fight to the death on a mysterious island owned by a reclusive crime lord? After a few phone calls, the mysterious Dr. Han accepted my proposal and the flights are booked for next month. Ultimately I hope to win the championship and restore Dutch pride, or watch my brave boys die trying.”

Netherlands and Manchester City Midfielder Nigel de Jong also expressed his keenness to set the record straight. “In the seventies the Dutch team were masters of ‘Total Football’ and now in the 21st Century I hope we will be able to call ourselves the masters of ‘Total Carnage’. It’s the art of playing without playing. If we can’t win back the hearts of the fans, we can at least punch them so hard in the chest we can tear out those hearts.” It is reported that the Dutch team have already begun preparations by kicking some stand-in henchmen through plate glass windows.

Cameron is the new face of L’Oreal