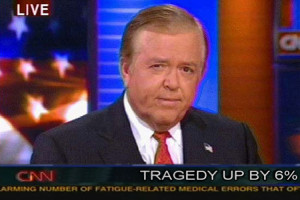 Tragedies are up 6% this year, “slightly less than expected but still healthy growth in the right direction” said Lou Dobbs today, anchorman for the global news channel, adding “and we haven’t even entered hurricane season”.

The news channel, which dedicates at least 99% of its coverage to tragedies, was concerned earlier in the second quarter that disasters were on the wane but have since bounced back, delighting stock holders at a recent annual meeting sponsored by British Petroleum.

“BP have really come to our rescue,” enthused CNN chief Bob Munk, “in more ways than one. First they paid for this place, and these little cakes right here and those kinda Japanesey-Mexican roll things over there? The ones that look like a snail hiding in bread? Yep. Then they killed the sea.”

Tragedy forecasters predict a strong repeat performance from Haiti this season and with high temperatures expected over the summer, ‘mad people with guns’ should ensure even growth.